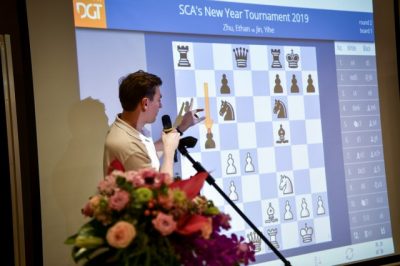 SCA’s 2019 New Year Tournament last Friday 4 January drew participants from more than 20 international schools across the city and beyond.

The tournament was hosted by Yew Chung International School Puxi – Hongqiao campus, with the games taking place under tournament conditions in the sports hall, and parents seating, practice area, sponsors tables and lunch in the dining hall. Competitors played 8 rounds in age categories U18, U10, U8 and 5 rounds in U6.

Live commentary of the games on the first board, and explanations of Time Control in Chess and Tournament Pairings and Standings System was provided by SCA General Manager, FM Robert Krzesaj.

Freshly cooked pizza was provided for participants by Melrose Pizza between rounds 3 and 4 as the Under 6 participants arrived.

After lunch, round 4 got underway in the playing hall. Whilst in the Parent’s area, live commentary from the first board continued, and YCIS PX ECE & Primary Well-being Coordinator, Jana van Zyl, spoke to parents about the benefits of learning chess for the development of executive functioning skills and using mindfulness as a strategy to support this.

Between rounds, many participants (and some parents!) enjoyed activities provided by SCA’s Partners, including face-painting from Lena Cao, table football with AKS, and chess puzzles with Pure Relocation.

As the games concluded a tie for 3rd place in the U6 category delayed the final announcement of results. Final standings are decided by points then tie break points in the order below:

Tie Break 1 : Buchholz (each player’s Buchholz score is calculated by adding the raw scores of each of the opponents he played and multiplying this total by the player’s raw score)

After all the results were counted, trophies, medals and certificates were awarded for the top 5 individuals in each category

All results U6 available Here

All results U8 available Here

All results U10 available Here

All results U18 available Here

Special Thanks to our Event Title Sponsor

Pure Relocation is a full-service relocation services provider based in China, but with a global perspective and international outlook. 专业高端国际搬家公司, 一站式服务尽享!
Website: www.purerelo.com

For over 20 years, Melrose Pizza has been consistently delivering pizza to your home, day or night – through the rain, the heat and the cold!
Website: www.melrosepizza.com

M.R.K.T. is a bag and accessories label founded by Harvard-trained architect, Tom Pen. Our designs are inspired by the creative lifestyle and informed by architectural concepts and values.
INSTAGRAM: @MRKTBAGS
Website : WWW.MRKTSTORE.COM
TMALL: MRKT 箱包

Congratulations to the winners and all participants for a memorable day of tournament chess. See you again soon!